The Museum Puri Lukisan in Ubud has invited a proposal for an exhibition of wayang painting there in September-October of next year. This 1973 painting by Ketut Madra would be a small but important part of that. 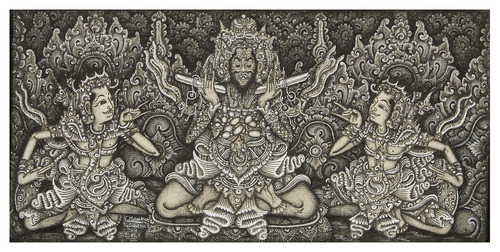 It shows Valmiki, author of the Ramayana, teaching Kusa and Lawa, Rama’s twin sons. Born in Valmiki’s ashram after the exile of their mother Dewi Sita to the forest following her rescue from Rawana and return to Ayodhya, the twins relied on Valmiki as spiritual guide and teacher throughout their early years.

The painting has a 40-year back story. Madra and I worked closely together for about nine months in 1973. He painted this as a gift shortly before I left. After it was finished and before I had even seen it, he was visited by Rudolf Bonnet, a creator, curator and guiding light of the Puri Lukisan. Bonnet asked Madra if he would be willing to donate the picture to the museum. Madra said he was sorry that he could not do that as he had promised it to me for the exhibition we were planning for the U.S. the following year. We’re both hoping it will hang there in 2013.