Bidding started at IDR 15 million at ARMA last Sunday for a 1973 painting of Kala Rahu.

The work, signed on the back by I Ketut Madra and on the front by his then-teen-age student Dewa Nyoman Pyadnya, shows Kala Rahu in the heavenly garden of the gods about to drink the elixir of immortality (tirta amerta). He is spotted by Ratih, goddess of the moon at upper right; she alerts Wisnu (just below), who prepares to hurl his spiked and razor-edged discus (cakra) at the intruder.

The work was selected by Larasati from about 20 pieces in the recent Museum Puri Lukisan exhibition, “Ketut Madra and 100 Years of Balinese Wayang Painting.” Larasati chose the painting in part because this scene from the Kala Rahu story is rarely shown in Balinese art and in part for the clarity of the representation of all the attending deities.

Ketut Madra had four apprentices in 1973. It was the traditional way for a young person to learn to paint. The student would live at the master’s house, help to prepare canvas and tools, and learn the ancient stories of the wayang kulit and the technique of capturing them on paper and canvas.

Dewa Nyoman was Madra’s most talented student that year by far. For a large work on canvas such as this, his assistance, under close supervision, would include adding shading to the line and then some of the color after the fully inked drawing of each element had been completed by Madra.

There were five bids for the work and the auction hammer fell at 19 million rupiah.

I still don’t know who bought the piece.

I just learned from I Made Berata that Ni Wayan Konderi, wife of I Ketut Madra, died early on Friday morning, May 30.

Kind, loving, gentle, and smart, with a warm and mischievous sense of humor, Wayan was the soul, spirit, wit, and house mother of the Ketut Madra Homestay.

These photos taken at the Museum Puri Lukisan opening last October captures something of the character of this remarkable woman who had friends all over the world.

Peliatan artist Madé Berata created this acrylic-on-paper painting for the cover of a new CD of gamelan angklung music from Vital Records appearing later this spring.

At the request of composer-teacher-writer Wayne Vitale, Pak Madé designed this modern wayang work showing angklung musicians and instruments. Its detail recalls old Balinese temple paintings of performances for royal courts and festivals, while the simplicity of the image and the humor of the wayang style caricatures bring it alive as a 21st-century CD illustration.

Vitale recorded the music in Kerobokan in 1992, his first year as director of Gamelan Sekar Jaya of Oakland, California.

Madé Berata (below) teaches wayang painting at the Institute Seni Indonesia in Denpasar. He is the son of wayang artist Ketut Madra, also of Peliatan.

Ubud’s Museum Puri Lukisan purchased four paintings from its recent exhibition Ketut Madra and 100 Years of Balinese Wayang Painting. Two works by Ketut Madra of Peliatan and two by the late Pan Semari of Kamasan join the museum’s permanent collection for display with other wayang work in Gedung III.

The exhibition and its catalog included 69 Balinese wayang paintings created over the previous century – 40 from my collection, 15 from Ketut Madra’s, and the remaining 14 from seven museums and private collections in the USA and Bali.

Hanoman and Surya by Ketut Madra (above, acrylic on canvas, 54.5 x 44 cm, 1972, #55 in the exhibition catalog) was the catalog cover image and was also used for one of the exhibition posters. One of the most widely reproduced paintings by Madra, it also appears in the September 2013 Departures magazine article Wayang: How to Paint a Legend.

Ketut Madra’s Dharmaswami (above, acrylic on canvas, 60 x 50.5 cm, 2013, #68 in the exhibition catalog) is a recent work completed just before the exhibition. It tells the same Tantri legend as the 1935 work by Ida Bagus Gelgel of Kamasan (below) – one of the best known and most highly regarded paintings in the Museum Puri Lukisan. Madra created the work especially for the exhibition to honor the Gelgel painting.

The other two paintings acquired by the museum are the work of Kamasan artist Pan Semari (1922-2000). Both depict Ramayana scenes in natural pigments with gold leaf on hardboard and include the appropriate verses in Balinese script. I bought the paintings from the artist in 1973.

Perhaps my greatest pleasure at the opening of Ketut Madra and 100 Years of Balinese Wayang Painting on October 7 was seeing the joy the event gave this modest 73-year-old artist.

Most of the guests at the opening were Balinese and about half of them were fellow artists who wanted to have their picture taken with Madra.

And Puri Lukisan curator Agung Muning (below right) finally realized the wish of his old friend Rudolf Bonnet to have Madra’s work in the museum’s permanent collection.

Madra and Ketut Sudarsa with one of their favorite paintings from the Tebesaya Gallery….

Verra Mulianingsih and Luh Windiari, who translated the exhibition catalog into Indonesian, on Ketut’s right and left, with Julie Boak and Ketut’s wife Wayan Konderi on the right…

And Ketut and me as the show began.

At top left, Agung Muning, curator at the Museum Puri Lukisan where he has worked for the past 59 years, plus a few installation shots of the exhibition “Ketut Madra and 100 Years of Balinese Wayang Painting” at the Musuem Puri Lukisan in Ubud, 7 October to 10 November, 2013. Photos by Anggara Mahendra.

Ten children from Yellow Coco, the art workshop in Nyuhkuning, showed up for a Galungan gallery talk on Balinese wayang painting as children’s stories. 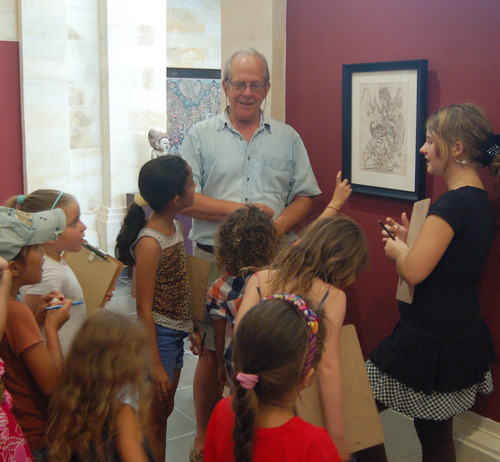 Yellow Coco, which brings Balinese and expat children living near Ubud together for out-of-school lessons in art, music, dance and creative expression is led by Susan Allen (below, left) and her husband Susiawan.

Susiawan caught me in the photo below expressing the surprise felt by Surya, god of the sun, and Aruna, the grat bird who carries him across the sky, when the young Hanoman, mistook the rising sun for a ripe red fruit. 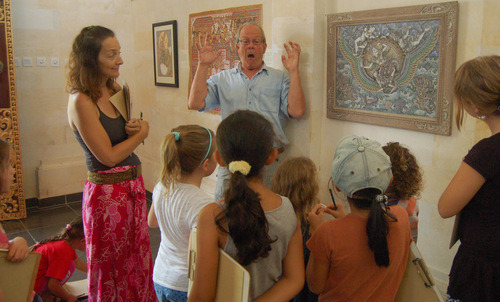 The painting of Hanoman and Surya above is by Gusti Ketut Kobot (1917-1999) of Pengosekan. Peliatan painter Ketut Madra’s version of the same story appears below. Kobot’s work shows the astonishment of Surya and Aruna in the moment. Madra’s captures the same scene a few seconds later after Surya and Aruna realize that their “attacker” is the already powerful and impetuous young Hanoman. (A detailed photo of the Madra version of the story appears in the invitation to the opening, three posts below this one). 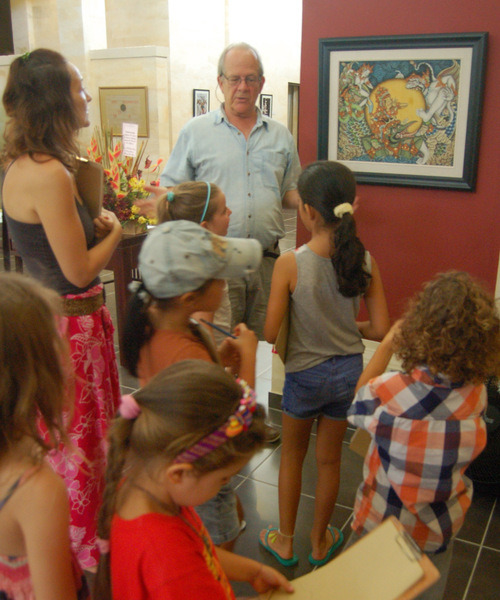 First shots of the opening of Ketut Madra and 100 Years of Balinese Wayang Painting, at Ubud’s Museum Puri Lukisan, 7 October 2013

The exhibition opening at the Museum Puri Lukisan is one week from tomorrow – October 7 at 6:00 PM. If you’re in Bali and you’re reading this, please do come.

The first 25 copies of the catalog for Ketut Madra and 100 Years of Balinese Wayang Painting arrived last night – just in time for the Larasati auction at ARMA later today. 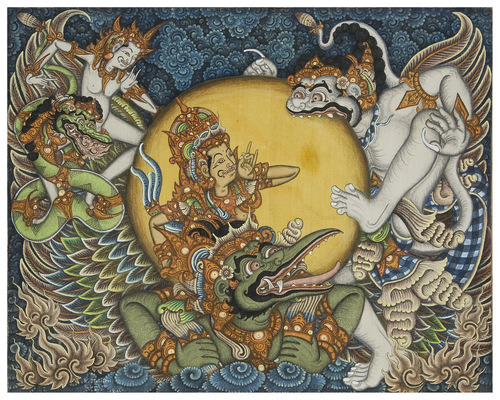