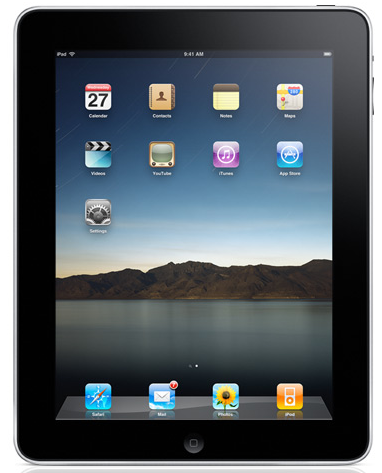 Apple watcher Jason Schwarz at TheStreet.com, after testing the iPad, believes Apple will sell 10 million of them in the first year.

Nobody is talking about the iPad as a must-have business device but that is exactly what it is. Anyone who previously relied on a notepad or clipboard will adopt the iPad…. Think of all the real estate agents and other salesmen who operate at point of sale.

There’s more. And naturally Schwarz’s post drew skeptical comment. But now the iPad’s being tried outside of Apple’s labs, people find it has uses far beyond those the rumor mills were generating before folks got there hands on one.

Designers and artists – already a Mac constituency – will buy them to show their portfolios. Ad reps will use them with potential clients. If businesses discover it really is a productivity tool and start buying in bulk, 10 million in year one becomes almost conceivable.

Later update: Over at Seeking Alpha, where Schwarz posts regularly, his first comments on the iPad predicted sales of 5 million units in the first year. While Schwarz is long on Apple, and some people say he’s less credible for that, he seems more perceptive than most on exactly how the company still thinks different.